First off, I want to thank all you who are visiting this site. It feels good to share the experiences and quite frankly the fun of networking in this new virtual world /within/ a virtual world.

As I was cleaning out my storage room, I found an old “Acer Aspire One” netbook. These “widdle” guys have the following specs:

So the challenge is this. Can I get a CCNA grade topology running on such a small netbook?

The answer is…yes! But here are the caveats.

1. Don’t expect this to be able to handle anything but 1 single image. You can use the same image over and over again in GNS3, but you then have to consider the operating system.

2. I chose Lubuntu for it’s lightweight footprint on such a limited hard drive.

3. I chose VIM to load as a text editor and for coding.

After the installation, the Acer didn’t come up gracefully. I was missing my mouse pointer and my wifi adapter just tanked. So there was an intermediary step of using a network cable and then plugging it into my home wifi/switch/router combo.

After you do a sudo apt-get update it took a very, very, very long time before all the updates were applied.

On the reboot, everything worked out great. I also had to add the ethernet bridge adapter so that I can route traffic to the internet off of the ethernet card.

Now that the wifi adapter works, I can surf the web that way and when I want to get my little router inside gns3 running, I can connect the ethernet cable since the bridge is actually bound to only that interface.

Finally, there is the discussion of what version of gns3. Naturally, for such a small netbook, I downloaded what was already in the Ubuntu Software Center. That version is 0.8.7 and will do the trick for a basic “Branch Topology” consisting of 1 router, 1 switch and 1 client machine in virtualbox.

To wrap up…you can get a decent “Mini-CCNA-GNS3” build loaded onto an old Acer with 1 GB of RAM. I think this build will work for kids who want to learn networking and don’t have the money for the full blown Republic of Gamers laptop I used all the time.

Now with a full blown server, I can run my own metro network…or I can work on this “mini” setup and get to an IOS just as well. 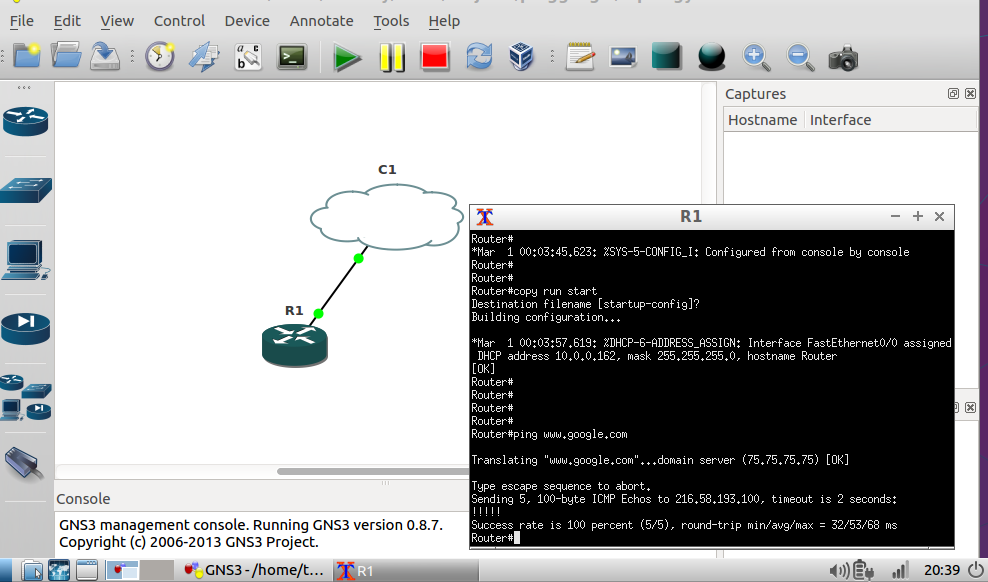 Worked in the IT space since '97. Love teaching and sharing new ways to learn about tech. View all posts by Matt Raio